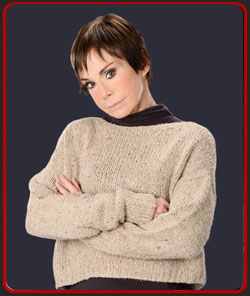 When I was six years old my father and I watched The “AL Jolson Story” with Larry Parks. After that I knew I wanted to be like Al Jolson when I was older. I wanted to make people happy and leave my mark as he left his. I sang and danced in my bedroom to every musical I had on a LP record. I knew every song in “The Sound of Music”, Flower Drum Song”, “South Pacific” as well as “Funny Girl” and many others. I would take a trolley from McKeesport, Pennsylvania to the Pittsburgh Playhouse and hang outside the theater and audition for any role I could. I played little boys—one of which was Winthrop Peru in “The Music Man”.

As a young teen I was in the Junior Miss pageant. I did not wear a white gown for the judges and was told I could not win the title but I did win the Talent Award. However, to my Dad, that and a nickel would not buy me a cup of coffee. I snuck out with my oldest brother’s friend to The White Barn Theater, which was a summer stock company outside of Pittsburgh. I apprenticed there for two summers and my dream was to go to Carnegie Mellon. My father’s business was in trouble in our small mill town and my two brothers were in medical school and my Dad refused to let me get a BFA in theater as he said “what could I do with that besides pound the sidewalks and wait tables” I needed to get my teaching degree to be assured a job and I also had to go to a state school as that is all we could afford. I went to Pitt. It was at least down the street from Carnegie Mellon.

After graduating I got on a bus and went to Ft. Lauderdale where I planned to teach. There were no jobs. I sat on the corner and cried. It was 1969 and a tall African American man took pity on me and told me not to worry. He was Ulysses Horne, the head of migrant Education for the South. He drove me to Markham Elementary School in Pompano Beach where I taught 4 year olds in a Federally funded school in a migrant worker’s camp. After that year I married a childhood friend and moved to Kansas City where he was finishing his fourth year of medical school. I taught in two different schools. The following July we moved to Cherry Hill where he was to be an orthopedic resident. I could not get a teaching job. I worked at Elaine Power’s Figure Salon because someone in our building heard I was a dancer. I had my first daughter (one of four). After many more unsuccessful attempts to get a teaching job, I decided to go to Philadelphia and audition for a dinner theater show. I took my 5 year old and did a cutting from Peter Pan. I was Wendy and Peter and sang “I Gotta Crow”. They cast me and outside the theater was a managerial agent who asked me what I was capable of doing. I told her everything.. I sing act and dance. She signed my daughter and myself. After that I was doing commercials, local movies, voiceovers and print work as well as theater work. I became a member of SAG and AFTRA and was an active member of the Philadelphia theater community. I had another child which took me out of commission and every time I tried to get back into the theater “clique” it became harder and harder, especially by the fourth child. I started working in smaller companies and participated in workshops in New York. I took voice physiology. I was in a scene study class with 9 other top actors. I went into Moorestown Friends School and started a theater program in the Middle School, which eventually led to a theater arts major in the high school.

I started teaching kids at the studio in my home. I became passionate about passing down the tools of the craft. I taught workshops at the Governor School of New Jersey at TCNJ for the 12 theater scholars. I did this the past three summers. The Governor cancelled the program this year.

I still perform several times a year in small theater companies in Philly. I have always believed that performing makes me a better teacher. I was born an actor. I approach life as an actor. I question things. My senses are in tune with day in and day out experiences. I may be a teacher but even my teaching methods are done as an actor. Acting is doing and so is learning. Doing is the key to remembering any details in any subject. I will be an actor until the day I die. If I am not in a play, I am passing on the craft to a young actor. I read all most all the new plays in search of characters for myself and my students. I listen to all the new musicals for new songs. I am in the present tense and plan to stay as such.

All classes focus on process and physical movement to achieve goals. There is no one theater technique, so my goal is to acquaint my students with all the techniques so they can have a toolbox for all their work. An actor’s instrument is his body so I make sure to focus on healthy ways to use the voice as well as ways to keep the body as flexible as possible for their work.